Hamilton-Lauraville Main Street works to support and promote existing businesses while working to attract complementary businesses that will best serve the surrounding community.

Hamilton-Lauraville Main Street works to support and promote existing businesses while working to attract complementary businesses that will best serve the surrounding community. With a very active Board of Directors and a talented group of volunteers, the Director of HLMS is well supported and is in a position to work closely with new businesses.

Each new business will receive assistance that will include a search for the right building, help with Use & Occupancy permits, an explanation of the two existing Urban Renewal Plans, business mentoring, limited legal advice, a listing on the HLMS website, promotion on Facebook, website, newsletter, newspaper and blog. Design assistance is also available for Facade Improvement Grants that include exterior improvements such as signage, lighting, painting, awnings, doors and windows.

HLMS designs events that attract visitors from inside and outside of the commercial district. Business owners are encouraged to act as sponsors of events, or volunteer in a way that best highlights the assets of the business. Meaningful relationships between a business and the surrounding community develop as a result of active participation in events.

The communities of Hamilton and Lauraville are looking for retail that includes business types that are currently lacking. The community members have expressed a desire for clothing, shoe, home accessories, small hardware store, art supply retail. Office space is available in a variety of sizes, and we happily invite more lunch patrons. Over 22,000 commuters pass through the business district every day.

There are eight neighborhood associations that surround the business district. A large art presence exists and events are planned for the first Friday of every month to help attract new patrons of galleries and small businesses. Cross promotion among very friendly business owners is a popular method to share customers. Community members help to advertise businesses and plan meetings in small businesses to attract more customers. Hamilton-Lauraville Main Street is business friendly!

For more than two decades, the old gas station lot on Harford Road has been the community lemon, sitting unused with a sinking roof atop a shabby building and uneven grounds strewn with pebbles and weeds. But now it is the latest passion project for Marsiglia and Lansinger.

The founding members of the nonprofit organization, whose mission is to revitalize and support local businesses in the commercial district, have been calling on residents to contribute to their fundraising efforts by buying paper lemons, available in Hamilton and Lauraville shops, for a $5 minimum donation. The lemons, signed by their donors, can be seen on the walls of local businesses like Zeke’s Coffee and Green Onion, signs that a future commercial kitchen — dubbed Main Street Kitchen at the Lot — will be an important fixture in the community, Marsiglia said.

“It’s going to be ‘feel good,'” said Marsiglia, also the owner of Green Onion, a fresh food market, and Hamilton Vacuum. “It’s going to solve some of our goals as a Main Street to incubate and develop businesses … and it’s also going to be a community thing where it’s going to help jobs.

The fundraising was sparked by Lauraville resident and landscape architect Sarah Hope, who painted a black-and-yellow lemon mural on the crumbling building that reads “Help turn this into lemonade.”

“While we were brainstorming, we were trying to focus on something that was food-related. We wanted to come up with something that visually represented food and the process of making food,” Hope said.

The paper lemons, combined with local businesses’ and state contributions, have raised around $300,000. Still, the organization has a long way to go. The kitchen is projected to cost between $700,000 and $800,000 over three to five years, Marsiglia said, and the site still needs inspections and approval from the Maryland Historical Trust before construction can begin.

Purchased by the Baltimore Development Corp. around a decade ago, the lot has seen only minimal renovations, like the removal of gas tanks to ensure that the space is safe and ready for construction.

“It was an eyesore,” Lansinger said, but Hamilton-Lauraville Main Street has used the space for community events regardless of the unattractive landscape. The organization began hosting farmers’ markets in the lot on Tuesday evenings in 2009.

“You would look at this place and think, ‘Why would anyone want to sit here?'” she said, but neighbors, who Lansinger described as “tough,” came and stayed for hours, listening to music and dining at the picnic tables the organization provided. Hamilton-Lauraville Main Street went on to host successful business meet-ups, community yard sales and Halloween parties in the lot.

“We started to hear from people that they were excited about the market,” Lansinger said, and more vendors wanted to sell their homemade goods. The only problem was the lack of certified kitchens available in the area. That is when Lansinger, Marsiglia and Hamilton-Lauraville Main Street board members put their heads together.

“We started pushing the commercial kitchen idea immediately,” Lansinger said. They envisioned the lot as a community space where people would gather for social events and annual Christmas tree lightings. They imagined the kitchen as a place where chefs, youth, seniors and veterans could prepare foods, network and learn new job skills. David Chapman, who has been selling international comfort food from The Green Bowl food truck at the Hamilton farmers’ market for two years, said the commercial kitchen will be valuable to up-and-coming vendors and startups.

“I know what it would have done for us if something like that was available,” said the 35-year-old Hamilton resident, who hunted for a commercial kitchen for nearly two years before opening his own about a year ago.

Chapman said he encountered several obstacles when looking for kitchens, which are scarce in Baltimore.

“When we were promised access to equipment time, we were always pushed to the corner and treated like a guest or an unfortunate necessity, which made it really hard for us, trying to grow and thrive in an environment where we never felt welcome,” Champan said.

But with the Main Street Kitchen, Chapman said, he pictures things going differently.

“It’s going to be a great place for people that are in a position like we were when we were first started. Potentially they could be a commissary for food trucks,” he said, noting that food trucks are often required to have a sanitary kitchen or home base to prepare and store food and equipment.

Marsiglia and Lansinger researched the prospect of opening a commercial kitchen by traveling to others in urban areas, including Washington and Detroit. They sought help from local politicians, pitching the community kitchen and town square idea to the mayor and state Del. Maggie McIntosh, a Baltimore Democrat.

McIntosh, who supported the idea, fought for capital funding for the Main Street Kitchen proposal, and in 2014, Hamilton-Lauraville Main Street was granted a $250,000 bond bill from the Department of General Services. The only condition was that the organization had to come up with a match of $50,000.

“One of the things about that community is that they started a farmers’ market, which did so many things to encourage the neighborhood to get involved, to bring in Maryland foods and organic foods. [They were] promoting eating better,” McIntosh said. “It has a history of having an idea, getting organized and getting it going, and they have been successful.”

Last July, the organization signed a 25-year lease for the lot, and in October, it held a fundraising festival with a beer garden and a showing of the new mural. Around 600 people attended, Hope said.

The Main Street organization reached its $50,000 goal in January, receiving roughly half its donations from local businesses. The other half, Marsiglia said, was generated from events and the sale of the paper lemons.

Though Marsiglia and Lansinger are happy with their recent accomplishment, it’s just one step of many.

“One of our hurdles was getting the lease, and the next biggest hurdle is fundraising. It’s a really difficult thing to do,” Lansinger said. “The process really is about raising money.”

With the paper lemons still up for purchase and the farmers’ market set to return in June, Lansinger and Marsiglia are hopeful that they can bring their mission to the forefront.

“The farmers’ market is very community-supported, so we’re getting our message out to the right people,” Lansinger said. “Those are the ones that we want to support this project.”

Married couple Bill O’Connor and Sue Holmes of Lauraville, who have lived directly behind the gas station for the past 35 years, have supported the Main Street events for years. They welcome the idea of the community kitchen and an improved neighboring property.

O’Connor said the lot has long been an eyesore.

“It’s hard to see it anymore,” said Holmes, who described Hamilton as a “foodie” neighborhood and “too nice and desirable” to have such a space.

“Since we moved here, it’s been awful, and it wasn’t within our power to do anything about it except look out the window and see it every day,” she said, noting that the only upside to living behind the space is the smell of the honeysuckle vines that grow on the fence between the two properties.

O’Connor, who has long hoped for an unobtrusive replacement, agreed.

“We believe it’ll be good and low-impact — other than maybe the smell of delicious foods wafting over here.” 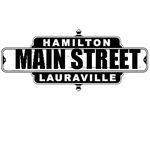 Send Yourself a Magic Link

We will send you a link by mail that will sign you in instantly! The email will be sent to regina@hamiltonlauravillemainstreet.org.